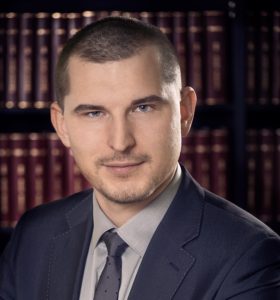 Marek Wocka finished in 2011 administration and in 2012 law studies at the Faculty of Law and Administration at Opole University. In 2016 he qualified as Attorney-at-Law passing the attorney-at-law’s exam at Opole Chamber of Attorneys-at-Law.

Since 1st August 2016 he has become a partner and since  1st January 2019 has become a managing partner in the Law Firm Meissner Wocka & Partners Attorneys-at-Law.

In 2012 he joined employees of the Law Firm Meissner  Wocka & Partners Attorneys-at-Law. He is fluent in German.

He specializes mainly in civil and administrative law cases, especially in environmental protection and local government law cases. In addition, he specializes in legal issues in the HoReCa sector.

During his studies he was involved actively in academic forum and in student government. He is a prize-winner of among others award of vice-chancellor of Opole University (in 2011 and 2012); a scholarship holder of Marshal of the Opolskie Voivodeship (in 2009, 2010 and 2011) and Ministry of Science and Higher Education (in 2010 and 2011). In 2011 he earned a second place in the Nationwide Competition for the Best Student in Poland “Student Nobel 2011” in the legal disciplines category. In 2012-2016 was the vice president of the Foundation’s board for the Faculty of Law and Administration at the University of Opole.

In the years 2012-2019 Marek Wocka combined his work at Meissner Wocka & Partners Attorneys-at-Law with duties at the Faculty of Law and Administration at the University of Opole. He had given lecturers, among others in the field of commercial public law, administrative and court-administrative procedural law as well as on environmental law.

Marek Wocka is an author of several dozens of scientific and popular science papers. Moreover, Marek Wocka conducts trainings in a scope of public procurement and public-private partnership, addressed to entrepreneurs as well as to employees of budgetary units.